Wollongong Touch Association will once again play host to the state’s best junior touch footballers, with New South Wales Touch announcing the 2019-2021 State Finals are headed to the Devils’ den!

In its new format, the Junior State Cup will be split into two conferences from 2019, with the Southern half of New South Wales to play at Wagga on 22nd-24th February, Port Macquarie hosting the Northern conference.

The top 8 teams from each division (U10s-U18s) will progress through to the State Finals, to be played at Thomas Dalton Park for the next 3 years, starting on the 27th & 28th April 2019.

After hosting the Junior State Cup for 12 years prior to relocating to Port Macquarie in 2013, the announcement that the first edition of the new-look tournament will be played at Fairy Meadow has been welcomed by Wollongong Touch Association (WTA).

“This is great news for Touch in Wollongong, and also the affiliates right along the South Coast,” WTA President Steve Sopher said of the news.

“We have a proud tradition of hosting major Touch tournaments, and the Junior State Cup is an event close to the heart of Wollongong Touch Association, having helped it grow into the huge success it has become. It’s great to see it coming home.”

WTA hosted the tournament as it grew to become the world’s biggest touch event between 2000 and 2012, and will welcome 160 teams and an expected 6000 people back to the region for the event.

The 2012 installment held at Thomas Dalton Park, attracted a then-record 311 teams and close to 4500 players from under 10s to under 18s. Close to 50 associations from Port Macquarie to Griffith sent teams, making it one of the most successful events in the tournament’s history.

“We are extremely pleased to be once again partnering with Wollongong City Council, Destination Wollongong and the local Wollongong Touch Association to bring this exciting new event to the region,” NSW Touch General Manager Dean Russell said.

“It is an area with strong links to the junior State Cup and with a renewed commitment from the community and indeed the dynamic Touch Association it was hard for us to look past Wollongong as our inaugural venue.”

“With the level of skills the young players have been displaying in previous Junior State Cups, by bringing the best of the best together like this we are looking forward to what will be a spirited weekend of competition..and lots of fun,” Russell said.

Players wishing to participate in the Junior State Cup must be registered with Wollongong Touch Association, with the Term 4 Junior Competition registrations OPEN!

Wollongong will also host a ‘warm-up’ event in preparation for the Southern and Northern conference tournaments, open to all affiliates across New South Wales. 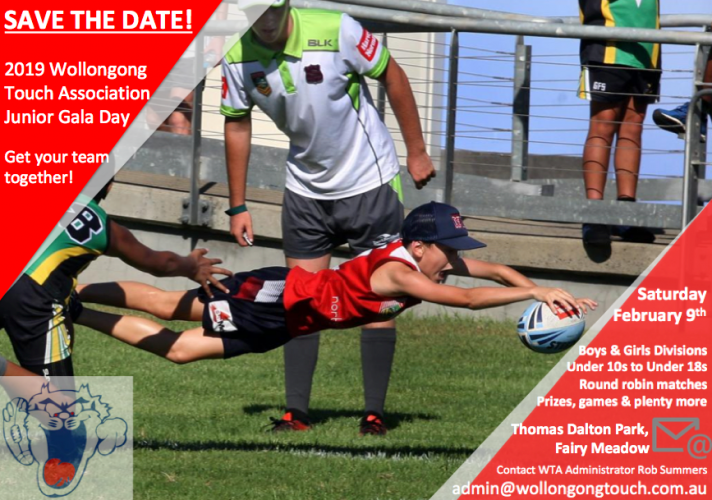