A successful weekend in Wagga for Junior State Cup.

Wollongong Touch sent 9 teams to Wagga to participate in the NSW Touch Junior State Cup Southern Conference. We had a lot of success on the field across all age groups and we are so thankful for the Coaches, Managers, Referee’s, Players and Families that represented Wollongong over the 3 day tournament. We were lucky enough to have 6 teams qualify for the State Finals which will be held in Wollongong at the end of April.

The boys played 8 round games over the first two days, winning 7 of those convincingly and making it through to the Round of 16 on Sunday morning. They came up against Wagga 2 and won 5 tries to 1 (11-2), they then progressed to the Quarter Final which saw them against a strong Wests side, however Wollongong outplayed them and came away with the win 3 tries to 2 (7-4). The boys were on their way to the big GF but unfortunately went down to Orange 3 tries to 0 in the Semi Final (7-0). This will see the 10’s Boys progress through to the State Finals in April. 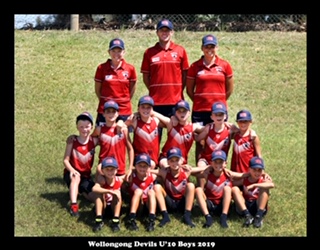 The 12’s Girls played 7 round games in the first two days, winning 4 of them against Lower Blue Mountains, Wagga 2, Canterbury and Yass. The girls progressed through to the Round of 16 Final on Sunday morning but unfortunately went down to a strong Wagga side 2 tries to 0 (5-0). 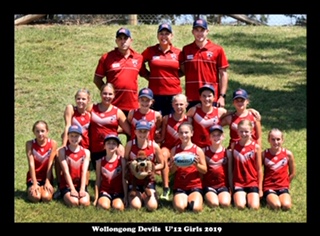 The 12’s Boys had such a successful weekend in Wagga making the Grand Final. But before they got there, they won their 8 round games convincingly and then progressed through to the Round of 16 where they played Mudgee and won 5-0 (11-0). The boys had a closer Quarter Final against Balmain only winning 1 try 0 (3-0). Wollongong came up against St George in the Semi Final and they won 2 tries to 0 (5-0) which then saw them progress through to the big GF!! Wests are always a strong, competitive club and the boys had a tough run against them in the big dance. The boys were unfortunately outscored against them and went down in a thrilling game 4 tries to 3 (9-6). Congratulations to the boys and coaches on such a successful tournament and we wish them luck for the State Finals. 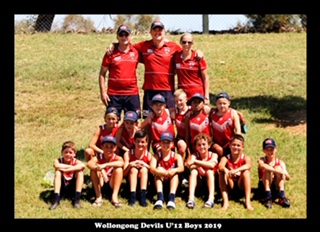 The 14’s Girls had a great first two days of the tournament winning 5 out of 6 round games showing great form heading into finals day. The girls faced a strong Wests side in the Round of 16, where both teams scored 2 tries but unfortunately with the first try rule (first try worth 3 points) went down due to Wests scoring first. Final score was 5-4. Unfortunately the girls missed out on qualifying for the State Finals in April. 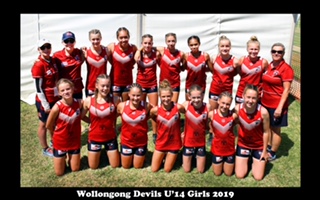 The 14’s Boys started the tournament off well with 5 wins and a draw from their 6 round games. They progressed through to the Round of 16 on Sunday morning where they came up against Deakin 2 and they won convincingly 7 tries to 1 (15-2). The boys were on a high as they took on Balmain in the Quarter Final where they played the best game of their tournament coming away with the win 6 tries to 2 (13-4). Unfortunately the boys were outplayed in their Semi Final against Parramatta and went down 4 tries to 1 (9-2). The 14’s Boys have qualified for the State Finals in April. 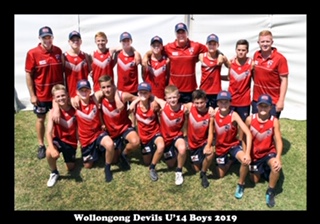 The 16’s Girls started their Junior State Cup campaign off well, winning 6 out of 7 round games in the first two days. They improved every game and started to perform well as a team as they headed into their Round of 16 game Sunday morning. The girls came up against Lower Blue Mountains where they won 3 tries to 0 (7-0), they progressed through to the Quarter Final where they faced Hills Hornets and won 3 tries to 1 (7-2). Next up was their Semi Final where they came up against Orange, who were performing well in every age division. Orange played outstanding and the girls unfortunately went down 5 tries to 0 (11-0). The girls are looking forward to getting some training under their belt before they take on the State Finals in April. 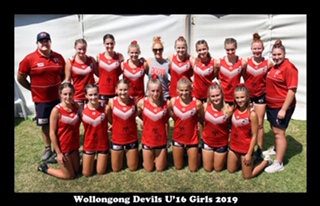 The 16’s Boys started off slow but they came together and won their last 5 round games making progress through to Round of 16 Finals Sunday morning. They came up against Parkes and won 8 tries to 1 (17-2). Next up was their Quarter Final where they had a thrilling game against Parramatta. The boys were competitive all game but unfortunately due to Parramatta scoring first and the boys chasing their tales the whole game, they struggled to make the comeback to get in front. The boys ended up going down 8 tries to 7 (17-14). With some more training, they will perform well at the State Finals. 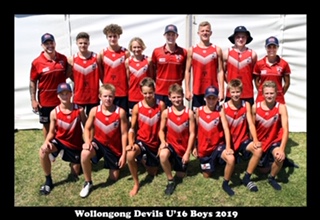 The 18’s girls had a rocky preparation for their Junior State Cup campaign with a number of injuries and minimal training runs. They played very competitive teams across the first two days where they only saw one win which was their last round game against UNSW Bullets. The 18’s girls division only had 16 teams so the girls had another chance to get a win under their belt and progress through to the State Finals. They came up against Penrith, where they played unreal and stuck it to them for most of the game. Unfortunately the girls went down 4 tries to 2 (9-4) and will not be representing Wollongong at the State Finals. 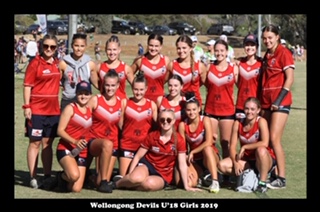 The 18’s Boys were down on numbers from the start but they still showed they are competitive across the weekend. They won 4 out of 6 round games and progressed through to the Round of 16 on Sunday morning. They came up against Cronulla and won 5 tries to 1 (10-3). After this, they progressed through to the Quarter Final where they ran out of legs due to low numbers. They played against Hills Hornets and it was a close game only being beaten by 1 try. The final score was 5 tries to 4 (10-9). The 18’s boys have qualified for the State Final in April. 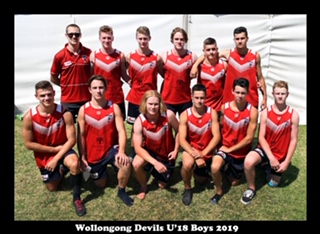