Congratulations to all Wollongong representatives at the 2018 National Touch League in Coffs Harbour!

After a damp start that saw the first day of play canceled, It was another year of strong representation by Wollongong representatives at the 2018 National Touch League (NTL) in Coffs  Harbour.

Wollongong Devils referee Tony Calabria took out NTL 2018 Referee of the Tournament, overseeing a thrilling Women’s Elite 8 final, won by the NSW Scorpions in a drop-off.

Just as enthralling as the women’s final was the Men’s Elite 8 Final, contested by the Country NSW Mavericks and Queensland Cowboys. The Mavericks, which included Wollongong Devils Bart Hill, Luke Tonegato, Matt Tope, Terry Deegan, Rob McCarthy and coached by Joel Willoughby, made life hard for themselves, leaking 3 early tries, before leveling and pushing the match to a drop-off. The Cowboys were too strong though, scoring at the death to take the match and back-to-back titles. To watch the full match, click here, and scroll through the 10:54:00 mark.

The Women’s Mavericks, which featured veteran Devils Jess McCall and Rachel Beck, had a handful of narrow losses, but importantly edged out NSW neighbours, NSW Rebels and NSW Mets, while also Alliance. Despite the wins, other results saw them just miss out on finals.

Wollongong had a sprinkling of representatives in the Southern Suns Women’s T-League side, coached by WTA Vice President Tim Robinson, which narrowly missed finals. Robinson was also named MVP for the Victoria Storm Mixed Open side, capping a memorable trip.

Twelve months after he was upgraded to a Level 5 referee at last year’s tournament, long-time Devil, referee Vince Costigan was upgraded once again, this time to a level 6 badge. This is the highest level accreditation a referee can achieve and equips the recipient with the skills to officiate International-level matches.

Congratulations to all representatives, and good luck for the year ahead. 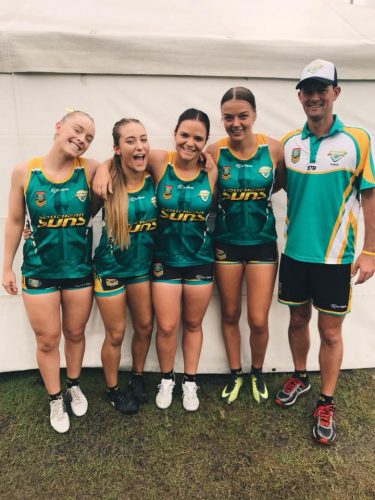